Channing Cemetery Story
CHANNING STREET CEMETERY, “OLD CEM”
The first cemetery in Elgin was established in the 1830s and was located at what is now the southwest corner of Division and Chapel Streets. In 1843 James T. Gifford donated land for the “Elgin Burying Ground,” later known as the Channing Street Cemetery. County surveyor Adin Mann surveyed and plated the cemetery in 1844, and in 1845 it was designated as “a public burying ground.”

Channing was located near the center of town where space began to dwindle. In 1888 the City of Elgin established Bluff City Cemetery as the new city cemetery. Shortly afterwards Channing lot owners were contacted and asked to have their family remains removed. However, interments continued until about 1906 when the last burial was recorded. At one time there were 3,500 graves in Channing.

By 1910 Channing had deteriorated into a weed-infested field. Many of the stones were barely visible and some had fallen. The City planned to make the cemetery a park once all the bodies had been removed. Re-landscaping began in 1915 but not all of the bodies were moved by then.

In 1920 the memorial commemorating war veterans was moved to Bluff City as were Armistice Day services. As late as 1929 the City planned to acquire Channing to use as a park and public playground, but by 1936 they still had not acquired the property. The City then sought an opinion from the Illinois Attorney General concerning legal obstacles in the acquisition. Channing Street Cemetery was officially closed in 1945 and removal of the remains was thought complete in 1947. In 1949 four acres in the southeast section were leveled in anticipation of park construction. It has been said that the many bodies left were to be moved by bulldozers. Some Elgin residents who lived in the neighborhood as children can remember the bulldozers breaking up old coffins and scattering the remains. 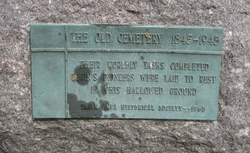 In 1968 Channing Memorial Elementary School was built at the northwest corner of the former cemetery on the corner of Channing and Fulton Streets. The same year, the Elgin Area Historical Society (EAHS) dedicated a bronze and granite memorial marking the cemetery site. One marked grave remains in Channing today. Located in the far southeast corner, it is the grave of William Hackman, an Elgin National Watch Company employee, who died 28 February 1885. The EAHS held a re-dedication ceremony at the gravesite in September 1971. Construction of a new addition to the Channing Memorial Elementary School was to have begun during late 1998. But, anticipating that some graves may be found, a team of archaeologists was brought in to dig in the area slated for construction. A preliminary dig confirmed the presence of at least eight grave sites.

Due to the winter weather, the dig could not begin until late March. The team eventually discovered two full skeletons and 13 graves by the time their dig concluded in mid-April. The remains will be studied by an anthropologist and eventually be sent to the Illinois Historical Preservation Agency in Springfield. It is unlikely that any of the remains will be identified, as the Channing Street Cemetery sexton’s records have been lost.

Occasionally a piece of coffin hardware, a tombstone fragment or a bone is found. Rumors abound concerning Channing. It has been said the school is haunted and that a house in the neighborhood has a patio made of old discarded stones from Channing. Although there is no documentation, a mass grave is said to exist in the south end of the park. – Judy Van Dusen, Elgin Genealogical Society; P.O.Box 1418; Elgin, IL 60121-1418

This building is an outstanding example of architectural form as it blends both functionally and aesthetically with its wooded hillside location. Because it conforms to the sloping site, each level of the three-story building has its own ground entrance for easy access. 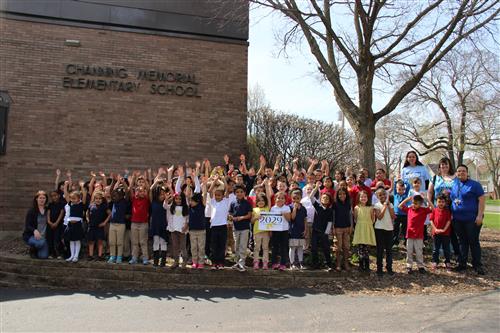 Its 26 classrooms are constructed in three room sequences, some separated by operable partitions which can be moved to accommodate classes of varying sizes. The design of the classroom permits teachers to expand classrooms for small or large group instruction. Special features of the building include special education rooms, library-resource center, gym, counseling rooms, music room, art room, a multi-purpose room that serves as the cafeteria, a sensory room, school administration offices, nurse’s office, a receiving dock and large storage area.

The Channing building is functionally suited as an elementary school in School District U-46.