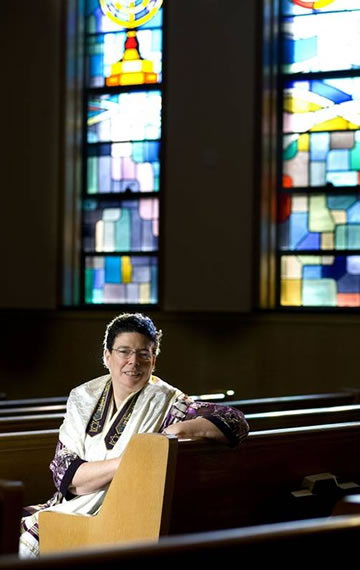 Elgin has had a Jewish congregation since 1892. This modern-style building was built in three stages from 1948-1958 and is the third site for the Elgin synagogue.

In 1892, a small group of Jewish residents organized the first Illinois synagogue west of Chicago. The congregation worshiped on the second floor of a building in Elgin and called themselves Congregation Tifereth Israel. The name changed to Congregation Kneseth Israel (CKI) when they merged with another local developing group. Although they purchased land at the corner of Franklin and Center streets, no building was ever built at that location.

Years later, an existing building was purchased at 77 Villa Street in Elgin. This served as the home of CKI for the next 20 years. The congregation continued to grow as discussions were taking place about building a new synagogue and Jewish Community Center.

By 1948, phase one of an entirely new building was completed at 330 Division Street in Elgin, which to this day is still our current location. Ten years later, a second phase was added on.

Modern vs Contemporary - What's the Difference? Modern design refers to a period of time, it is a design style that was created in the 1920′s – 1950′s. It doesn’t change, it is a defined style, and will remain such forever. Contemporary design is ever changing. It is at the moment. Contemporary design is a living, breathing entity.  Modern design really refers to “Mid-century modern”. It is recognizable by it’s clean, unadorned interiors. Use of natural materials such as wood, leather, teak, and linen are prominent. Molded plywood and plastic is very popular in modern furniture, as well as polished metal.