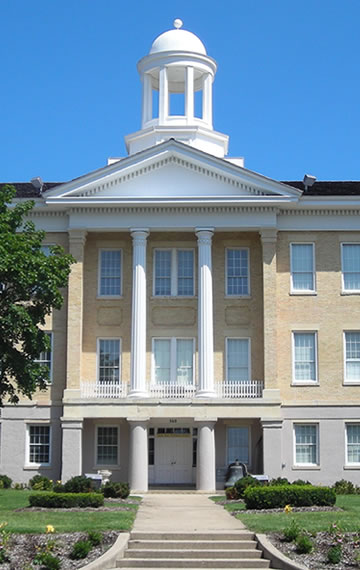 Museum admission is FREE during OPENElgin

The Elgin Area Historical Society is housed in an 1856 landmark building known as Old Main that was once part of the Elgin Academy. It is listed on the National Register of Historic Places. The Society has occupied its current home, Old Main, since 1987. Old Main opened on December 1, 1856, as a private school, the Elgin Academy, and is noted for its Greek Revival design. Old Main was Elgin’s first building entered on the National Register of Historic Places. In 1911 lightning caused a fire that destroyed Old Main’s roof which was replaced without the building’s distinctive gabled roof and cupola. The Elgin Academy continued to use the building until 1969 when financial pressures and new safety codes led to its abandonment. The Academy offered Old Main to the City of Elgin which in 1976 decided that its preservation would be an appropriate bicentennial community project. Prominent Elgin merchant John Spiess proposed a “Buck-a-Brick” fundraising campaign selling 150,000 bricks being laid in Fountain Square Plaza Mall. The successful campaign enabled Elgin to take ownership of the building and, despite another fire in 1978, restore the building’s exterior in 1979-80. In 1981 the City of Elgin leased Old Main to the Society. With additional funds raised by the Society and from state and federal sources and with many hours of volunteer labor by members of the Society, Elgin’s Golden K Kiwanis Club and Gifford Park Association, Old Main’s interior was refurbished for museum use. The Society moved into Old Main’s first floor in 1987 and has used all three floors since 1991.

About the Museum: The Elgin History Museum is alive with two floors of exhibits reflecting Elgin’s rich past. Pack James Gifford’s wagon and visit his log cabin in early Elgin. Hear the watch ticking at the Elgin National Watch factory, sit in an Elgin Road Race car, and feel the beat of the Hiawatha Pageant. A research library and archives of Elgin history are also available. Open hours are Wednesday through Saturday, 11 a.m. to 4 p.m. Open Elgin admission is FREE!