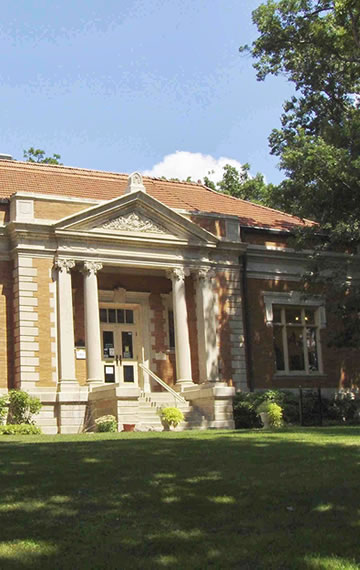 The Elgin Public Museum is now the oldest building in Illinois built expressly as a museum that is still serving that purpose. Its Neo-Classical style of architecture is unmistakable from the front with its two free columns and two square-engaged columns. Inside the Museum, visitors can still experience the beautiful and original oak woodwork, plaster wall ornamentation and ceramic tile floors.

Fun Fact: The natural history collection belonging to Mr. and Mrs. G. P. Lord was first exhibited in the Lords Park Pavilion in 1898. However, it was the Lords’ desire that their collection be housed in its own building. In 1904 local architect David E. Postle was contracted to design a building to serve this purpose.

Construction of the current building’s central structure began two years later, to be paid for in donations, the largest donation coming from the Lords. When Mr. Lord died in 1906, the center section of the building had been completed as well as the basement of the west wing, at a cost of $9,856. The following year, the metal roof covering the west basement was removed and the west wing was completed. However, after the death of Mr. Lord, interest in the project declined and the north and east wings of the building were not completed as originally planned. Further delays in opening the Museum were caused by breaks in the floor in 1908 and disagreements over hiring a full-time curator. The goal of housing a museum collection was forgotten as the building served as a storage place for hay from 1909-1911, and as the City Dog Pound, with animals being disposed of in the basement, from 1911-1917.

Originally named Lord Memorial Museum, the building finally opened on November 12, 1920 as the Elgin Audubon Museum, the Audubon Society having completed an agreement with the City of Elgin in 1917 to operate the Museum.