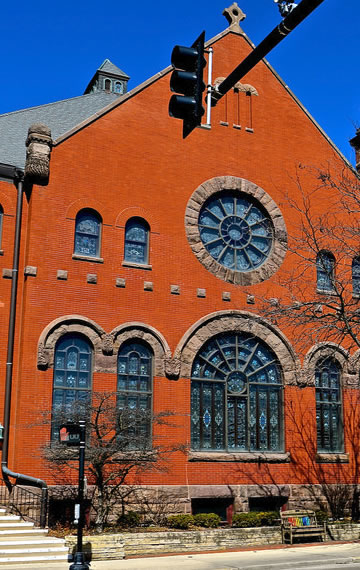 The First Congregational Church was designed by architect Wesley Arnold in the Richardsonian Romanesque style.  The building was constructed red pressed brick and brownstone trim in 1889 at a cost of $35,000.  The building has several elements of the Richardsonian Romanesque style including; heavy sandstone foundation which contrasts with smooth and rough faced brick, wide round arches over rows of windows, and the square tower. The building also features some of the most elaborate stained glass fenestration, that is the arrangement of windows and doors on the elevations of the building.

The interior was laid out as a church in the round, or the Akron style. The sanctuary included an organ with over 250 pipes – an instrument that still ranks as one of the largest in the Fox Valley.  The large seating capacity of First Congregational Church soon made it a community auditorium on par with the current Hemmens Cultural Center.

Post World War II growth led to the demolition of the eastern portion of the building and the construction of an education wing in its place.  The new facility also included a chapel, a new office, and fellowship hall. Following a million dollar fund-raising effort during 2008-2009, the exterior of the education wing was redone to match the architecture of the existing original church.

Akron style was a scheme for the design of churches and other religious buildings that housed Sunday schools. It was characterized by a set of wedge-shaped classrooms that radiated from the direction of a central superintendent’s platform. Doors or movable partitions could be closed to separate the classes, or opened to allow the entire body of pupils to participate in school-wide exercises.