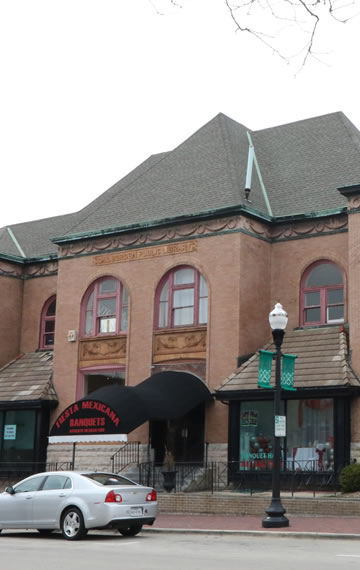 The only extant building associated with turn-of-the-century governmental buildings is the old Gail Borden Library. Formerly housed in a storefront building on Chicago Street, the library was established in 1894 at 50 N. Spring Street in the former 1870s residence of David Scofield (David ran a tree nursery and his wife Emily was the daughter of Cyrus and Sarah Larkin). This Richardsonian Romanesque style building was purchased in 1892 by Alfred B. Church and Samuel M. Church, stepsons of Gail Borden. The brothers wanted to memorialize their step-father by turning the former residence into a library that was named after the late Gail Borden. Rather than raze the old, brick house that stood on the lot, architect W. W. Abell incorporated it, adding two wings to the building. The building was finally completed in 1894 at a total cost of $15,000. Not included in this figure, however, was the $1,200 that Mrs. Alfred Church had spent to “fit and furbish” the room that she had personally designed for the library’s Board of Directors.

The library outgrew this building and relocated into a newly constructed, mid-century designed building in 1968. In 2004, the library moved again to an even larger facility located at 270 N. Grove Avenue. Filled with more than just books, this fantastic building houses artwork, videos, recorded music, exhibition space, meeting rooms, computer space and a whole lot more.

50 S. Spring Street is a two-story brick structure designed in the Richardsonian Romanesque style.  The building contains terracotta adornment found at its cornice as well as the honorary terracotta lettering proclaiming the building as the “Gail Borden Public Library,” found at the building’s east elevation. Copper banding also outlines the building just below the terra cotta laurel swag detailing. The building has had very few alterations since being converted to a library in 1894. When the library relocated in the late 1960’s, Ackemann’s Department Store expanded into the space until 1985 when it was converted to a restaurant. Source: Gifford Park Association