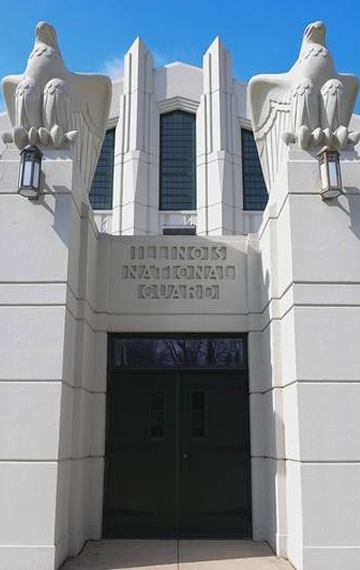 Tour this art deco building completed for $125,000 in 1939 as part of a Works Progress Administration project and which has served as the longtime home of the Illinois National Guard.

The iconic building, on Raymond Street two blocks east of the Grand Victoria Casino, isn’t the first building to serve the National Guard, a group that has had a presence in Elgin since 1877. Originally known as Company E of the Third Regiment, the local guard unit dubbed “Elgin’s own” would see service in the Spanish-American War, the Pancho Villa Expedition, and World War I, along with other call-ups for domestic duty.

Company E was disbanded after World War I, and in 1926 a successor unit Company I was formed. This unit would be called upon for service during a southern Illinois coal strike and also “federalized” in March 1941 prior to the start of World War II.

Unlike Company E this new unit had a home — though hardly elaborate quarters. From 1926 to 1931 they met and drilled above Scheele’s Grocery Store at the northwest corner of Division Street and Douglas Avenue — now part of Elgin’s Civic Center parking lot. The group then moved on to Strauss Hall on South Grove Avenue near DuPage Street. They remained at that location until the current Armory was constructed.

Hopes for a permanent home for the Illinois National Guard date back to the early 1920s when $10,000 was appropriated by the state of Illinois to purchase property on the near east side on Geneva Street between Fulton and DuPage streets. That site was later deemed to be too small and the Guard was required to look elsewhere.

Knowing the city would lose the state money, citizens searched for another site. Their quest ended when the Elgin National Watch Company offered the donation of four lots of property east of its recently razed company gymnasium.

Ground was broken in April 1937. Among those participating in the ceremony were the Company Commandant, the project engineer, and an 87-year-old man who lived on the site at the time the nearby watch factory was being built.

Workers swung into action the same morning as the ground breaking. The project was threatened a month before work even began when organized labor objected to the WPA’s or Works Progress Administration plans for the building. A compromise was reached when an arrangement called for two union workers to be employed at 80 cents an hour for every three relief workers supplied by the WPA.

More than 1,500 attended the dedication on a sultry evening in September 1939.

“We dedicate this auditorium in a time of peace at the very hour the peace of the entire world is being threatened,” said the emcee, acknowledging the growing war clouds in Europe. Other speakers followed pleading for neutrality in the overseas conflicts.

In addition to serving as a home for the National Guard, plans were announced for the community to rent it for dances, basketball games, and commercial exhibits. By the 1970s, the building’s deteriorating condition prompted a state task force to recommend that it be torn down.

“There is no support for saving it among the city council. This is one public building that the city doesn’t need to bail out,” said a council person. By fate, the structure managed to survive.

In recent years the armory has become the recipient of federal funds to restore the structure. According to SFC Terry O’Neill, the current armory manager, the building has seen extensive refurbishing throughout.

The drill floor has been refinished and resealed and much of the building has been repainted and military logos have been added to certain walls. Additional security and signage are among the improvements expected in the future.

The upgraded armory allows the Illinois National Guard to better live up to its motto, “Always Ready, Always There.”