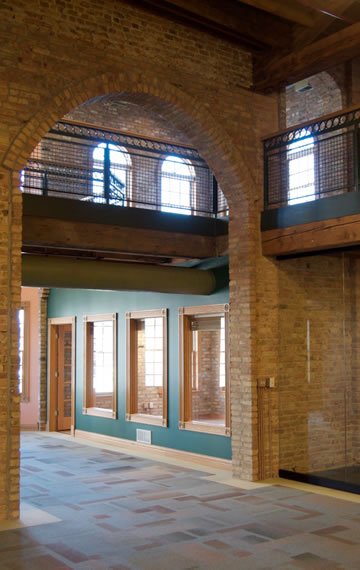 While many of Elgin’s pioneers made their money through farming or the dairy industry, William G. Hubbard made his fortune through the dry goods business. Hubbard, a pioneer merchant, opened his building on the corner of Chicago and Douglas in 1851. It was there that he kept company with the best of the movers and shakers that Elgin had to offer. One of Hubbard’s original tenets was John Newman, owner and operator of Springbrook Creameries, as well as the owner of over 500 dairies. His other tenets were many of the German enterprises of the day, including Siedel’s Bakery, Adler’s clothing store, and Pabst Chicago House.

The original wooden building was destroyed in one of Elgin’s worst fires ever, on March 23, 1974. The fire shattered the glass windows across the street and seared buildings blocks away. It would be replaced with a white brick building that connected many other buildings on the block via the second and third floors. The second building would come to be known as The Lawyers Building, which was gutted by fire in 1979. It was torn down in 1980.

Kurt Kresmery reconstructed this property in 1999 with his brother – Marc Kresmery Construction. The second and third floors are connected to the building next door on Chicago street giving the total structure a footprint of 38,000 sqft. Much of the structural elements of the rebuilt building were reclaimed from previously used brick and timbers from other period buildings that were torn down.