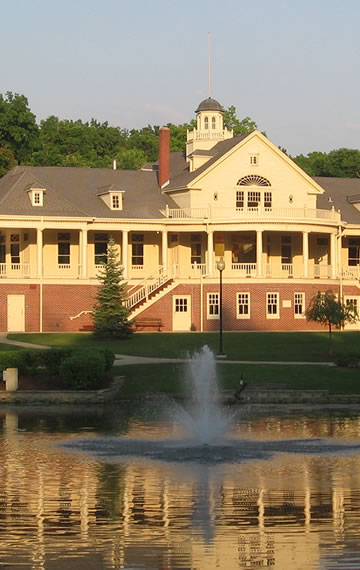 Visitors can enjoy watching the American bison, elk, and white-tailed deer that live in wooded enclosures throughout the year. During the summer months, the Lords Park Farm Zoo features sheep, cattle, chickens, pigs, goats and more!

Lords Park was originally a farm owned by Dr. Joseph Tefft. In 1893, the property was purchased by George and Mary Carpenter Lord and presented to the City of Elgin as a gift with the agreement that the property would be used as a city park. The park was dedicated in 1898.

One century ago, the park featured two lagoons, a pavilion, pits for bears and other smaller animals, a large enclosure that housed deer, goats, peacocks, and other fancy fowls, and a building with glass sides that featured eagles and buzzards. Swings, teeters and sandboxes were installed in 1900.

The park we enjoy today has undergone many changes since its inception in the late 1800s. The original pavilion burned to the ground on September 30, 1897 and was replaced with the larger building known today as the Lords Park Pavilion. The bear cages were filled in and graded to the level of Willow Creek in 1969 and the eagles are gone.

However, the park’s important place in urban life has not changed over the years. George P. Lord remarked in his speech at the dedication of the park in 1898, “… The park is designated as a public resting place, a place to which the people may resort for pleasure, rest and recreation. From this standpoint, who can estimate its value or have a just conception of the beauties that may be derived from frequent and prolonged visits to its cool and refreshing retreats?” This observation still rings as true today as it did over 100 years ago.