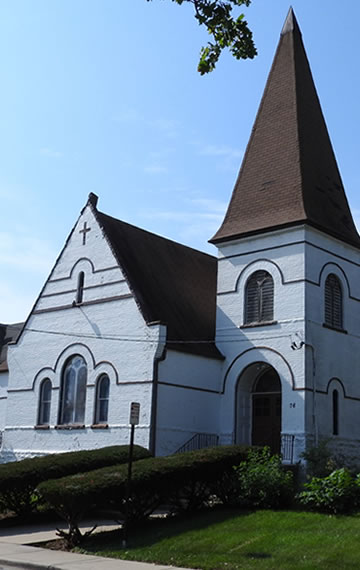 HISTORIC SIGNIFICANCE – 76 S. Jackson Street was built in 1892-93 as the Zion German Methodist Episcopal Church. It was designed by notable Elgin architect, W.W. Abell and built by Henry Jensen in a white brick veneer. In the 1950s, the church was renamed Wesley Methodist Church. The Congregation then moved to 1070 South Street in 1956. At that time, the building was sold to Calvary Foursquare Church, which owned it until 2003, when they sold it to the Philadelphia Holiness Full Gospel Baptist Church.

ARCHITECTURAL SIGNIFICANCE – 76 S. Jackson Street displays characteristics of the Richardsonian Romanesque style which was popular for a short period of time between 1880 and 1900. The church displays a steeply pitched, parapeted gabled roof, brick masonry walls with limestone accents, punched openings topped with arches, and a distinctive tower with a recessed entry that is asymmetrically placed on the façade. The building is considered a significant property in the area.