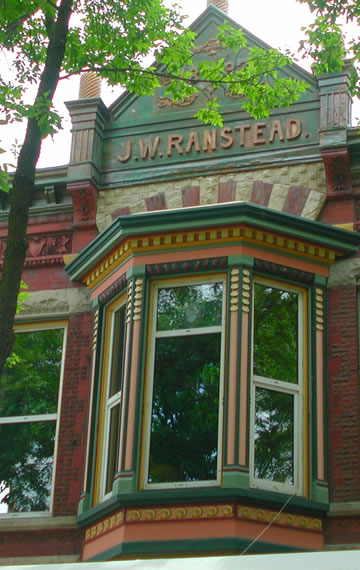 In 1892, the Ranstead Building was completed. It was designed by Elgin Architect Smith Hoag, with Siederstrom and son doing the carpenter work, and Lilly and Palm doing the mason work. The Elgin Daily Courier of December 31, 1892 declared J.W. Ransteads Building on DuPage street is perfect in it's construction and is one of the best in the city.

John W. Ranstead was a local, having been born at Udina, Illinois just west of Elgin. He was well educated and graduated from the law school of the University of Michigan in 1866. He returned to his home area of Elgin to practice law and became a judge in Kane County court system.

He retired as judge in 1882 and focused on his law practice, specializing in real estate loans. One of Judge Ranstead’s outstanding accomplishments was establishing the Home National Bank and the Home Trust & Savings Bank. The 2 institutions evolved out of a private banking concern that existed in Elgin before the Civil War. The Home National Bank focused on manufacturing and commercial endeavors; its stockholders were comprised of Elgin’s elite and wealthy citizens — Judge John Ranstead was its president. The national bank and the savings bank operated out of the Home Bank building at 100 E. Chicago St. Both banks folded in 1932 during the Great Depression and assets liquidated in 1937.

Ranstead’s law firm operated out of the second floor of the building at 167 DuPage St. Son-in-law Charles Lehmann and a third partner, Perry Fuller, rounded out the firm. Judge Ranstead died in 1915.

While Ranstead & Lehmann practiced law on the second floor, at work on the first was one of Elgin's savings & loans. The large walk-in vault on the first floor & safe in the basement remain as proof that it was there.

Years later, the street level floor of the Ranstead Building was next occupied by various small businesses most often reflecting the times.. 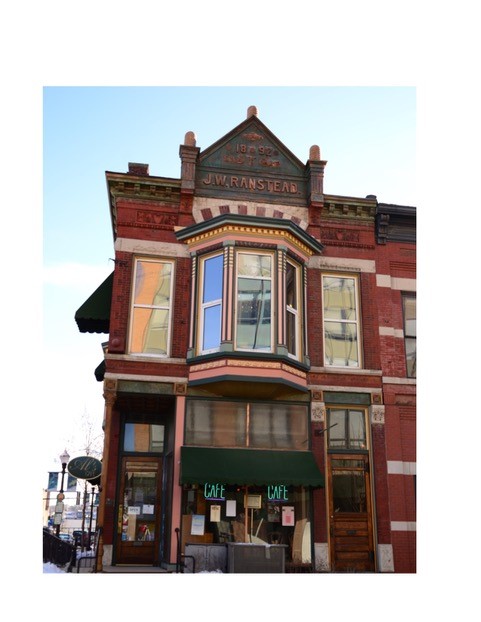 A new concept, natural gas for commercial use, had made its debut in Elgin in the late 1880’s early 1890’s & thus the Elgin American Gas Co. occupied the first floor in 1900. By 1905, Miss Mary Crane had established her Millinery store there selling large hats with flowers, feathers and fabric which were then in vogue.

The Marks Brothers next occupied the street level floor of the Ranstead building, they specialized in clothing. They were followed by Michael and Hyman Ableman's tire, radios and accessories store. Ableman's lasted until the awful truth of the Great Depression forced them to close their business in 1933. Two appliance stores next tried their luck, followed by a music store with a radio repair service.

Souster’s Flowers moved into its new quarters in the early 1940’s. In 1951, Souster Flowers took a partner, Maurine Lasher. She had worked for the business and when the opportunity arose, she joined them. The business became known as Souster-Lasher Flowers until 1976.The next occupant of the street level floor was an athletic shoe store called “The Agony of De Feet” (A parody of the slogan for a TV sports show)

Finally in 1982, William Alan Berg bought the Ranstead building with the idea of turning the entire place into a restaurant. Al Berg acquired the recipe for the “Burns’ Malts” - rich & tasty malted milk shakes made popular at Burns Pharmacy on Bluff City Boulevard;

enovated the street level store, and opened the second floor to the public, creating one restaurant called Alâ€™s CafÃ© & Creamery. Al Berg passed away at the age of 34 & his family continued the business he had started and successfully operated until it became impractical to continue. In 1998, Al's Cafe was sold to Julia Hugee-Pedersen & ultimately sold to the present owners: Chef Tony Jamin & Patricia Jamin in 2005.

The Randstead today, remains much the same way it started . . .
Big, bold and beautiful standing on the corner of DuPage St. - now DuPage Court and Spring Street.

Architecture: Ira Bach pronounced the Ranstead building to be a surviving example of a relatively rare architecture: "Queen Anne rendered in masonry in a commercial application."

Yummy tip: While the architecture of this building is stunning, the most notable highlight of this stop just may be Al's old fashion malts served  - you'll need a spoon!