You are here: Home / Library / U-46 Planetarium & Observatory 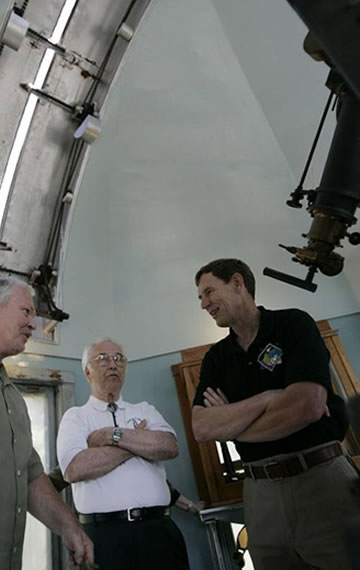 The Elgin National Watch Company built and opened an observatory in 1910 that allowed the company to set their watches by the stars, guaranteeing precision in an era when time and efficiency were becoming increasingly important. Designed by architect George Hunter and completed in 1910 in the Classical Revival style. It is on the northeast corner of Watch and Raymond Streets, two blocks east from where the factory once stood. It was constructed on a gravel base, which could absorb surface vibrations. Concrete piers were dug 60 feet (18 m) down into this layer to secure the telescope and Riefler clocks.

The two-story building can be split into three segments: the entrance, the observatory, and the office. The entrance segment connects the other two segments. The walls are made of lath and plaster and the room features a lavatory.  A switchboard in this room directed signals from the observatory to the offices in Chicago. The 1963 planetarium 39 by 27 feet (11.9 by 8.2 m) addition is on the rear of the building. It features a perforated aluminum dome and a Spitz A-3-P Star Projector. Up to 65 people can be seated in the addition.

The observatory was given to the school district for enhancing the education of school children in 1960 as the company declined and eventually closed. The planetarium is the first of its kind in any Illinois public school system; it was added to the Observatory building in 1963. It is one of the most unique educational tools for students to learn science and astronomy as well as the historic impact the observatory had on the community. Former NASA Lead CapCom (capsule communicator) Hal Getzelman, a 1972 Elgin High graduate, was one of the students who experienced the magic of the planetarium while a student in U-46.

Architectural Significance:  Some elements of the Classical Revival style that showcase themselves here include the cornice-line balustrade, the dome – here in the form of the retracting roof for the telescope – long windows and the polygonal projection which is the section below the domed roof. Built by Elgin architect George Hunter, the Watch Factory Observatory was designated a local landmark and listed on the National Register of Historic Places in 1994.